The Chicago Blackhawks have played five games, five into overtime and taken 8 out of 10 possible points earned. Life is good, no? No, it’s not.

Chicago Blackhawks fan’s expectations for this season of hockey in Chicago were not running high this summer. Well, fall is here and your Chicago Blackhawks are sitting in 2nd place in the Central Division after the first five games.

After the Chicago #Blackhawks started the season taking 8/10 points, where do you think they finish this year?

The Chicago Blackhawks have scored a Central Division best 22 goals, but have also given up a division high of 21 goals. The ‘Hawks are playing a wide open style of hockey that is fast paced and wildly exciting.  Sean Tierney @ChartingHockey provides visuals of the Blackhawks’ fast pace and its consequences.

This chart adds up both Corsi-For and Corsi-Against, and the ‘Hawks are perched way up on top.  To translate, this means Chicago is both taking and giving up a ton of shots. This formula did not work well for them last year, and it won’t work well this year either.
Additionally, the problem is that they are behind their opponents in quality scoring chances. The differential between expected goals for and expected goals against has the ‘Hawks in the red.

When starting goalie Corey Crawford returns to game action this Thursday, he can expect to be a very busy man.
Corsica uses a “K” metric that is a composite of several key metrics to evaluate and predict performance. In the following chart, the ‘Hawks are not quite treading water and about to go under by having an OK offense but below average defense. 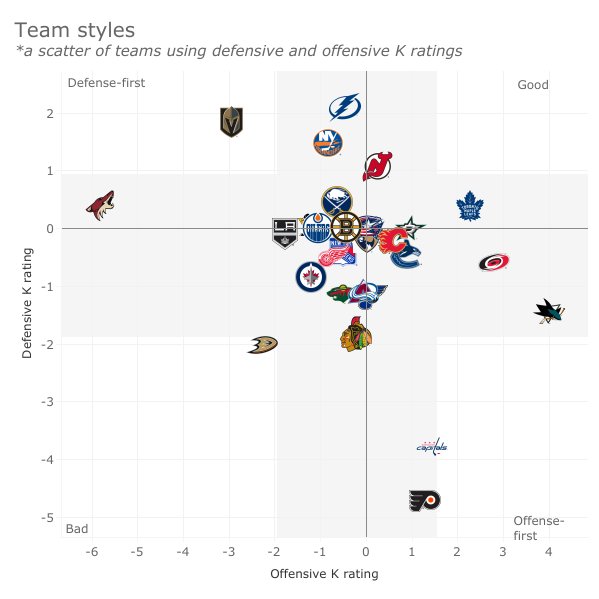 A good offense is a good defense.

Benjamin Franklin said,  “A penny saved is a penny earned.” The same can be said about saving goals in hockey. The Chicago Blackhawks have squandered leads in their first 5 games which have put them in 5 wild finishes.

The 3-on-3 overtime format is good entertainment, but it is not a determiner of a good hockey team. Additionally, 3-on-3 hockey is exhausting for the players. The skaters in overtime are usually the team’s best players. As a result, a team that has a penchant for playing a lot of overtime is going to wear down its star players.

The stats guys see it.

Here’s what Sean Tierney says about our Chicago Blackhawks.

I really respect CHI and NYR for playing fast despite not necessarily being very good. pic.twitter.com/VcXVuoTgJ7

And Micah Blake McCurdy @IneffectiveMath sees the Blackhawks finishing last in the Central Division and the Western Conference. He predicts an 86 point season, and that’s not good.

So can we have a little optimism here, please?

Whew, okay then!  Here are the positives that the Chicago Blackhawks can build on to overcome their current trend:

The season is young, and the youngsters need to bring it.

In addition to the aforementioned nine players, the rest of the players need to show what they’re made of. This may be yet another strange feeling of deja vu, but this season strongly depends upon the contribution from the supporting cast.

They need to ramp up their play defensively and on special teams if they want to shake off the current mode they’re in.

Yes, there are once again a lot of ifs this season. If Nick Schmaltz can find some aggression in his play. If Brandon Saad can rediscover what made him a good hockey player. If Jan Rutta can reduce his turnovers. If Brandon Manning can step up his play. If Artem Anisimov can perform CPR on Chris Kunitz. If Alexandre Fortin can keep up his frantic pace and hit the score sheet. If John Hayden can provide energy without losing control. If Crawford is truly ready to return in a full time starter’s role. If Cam Ward can be a solid backup to Crawford. If the team can devise a functional power play.

Want your voice heard? Join the Blackhawk Up team!

Write for us!
Related Story: Brandon Saad is in coach Q's Doghouse

So yeah, the Chicago Blackhawks have a lot of room for improvement.

Now THAT would be the good life.